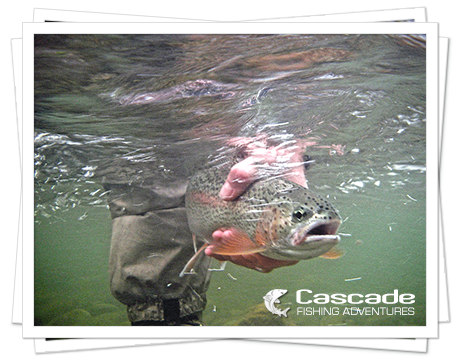 There are two species found in our area – cutthroat trout and to some extent, rainbow trout.

Coastal cutthroat trout do not extend very far inland, usually less than 150 km from the coast. They occur on all our coastal islands with suitable habitat, and in practically all streams and lakes of the coastal region. Locally, cutthroat trout are found in nearly every slough, small stream and Fraser river tributary, including the Fraser itself.

Cutthroat trout are found in most of these waterways year round. In the Fraser, the best cutthroat trout fishing occurs in the late fall and into the winter. The colder weather allows the Fraser river to substantially clear up, and fall runs of chum salmon lay their eggs in side channels, thereby attracting cutthroat trout.

These fish will migrate to the sea and will usually remain within the river estuaries or near shore, moving in and out with the tides as they feed. Extensive migrations can occur along shoals; individuals can travel 100 km from their natal streams to feeding streams. When mature, they return to spawn in the stream where they hatched.

Coastal cutthroat are highly predatory, feeding on other fish, but during the salmon spawning season they also eat loose eggs. In the ocean estuaries, they feed on crustaceans as well as fish. The young feed mostly on insects.

Cutthroat trout are often caught in the Harrison river during the fall while fishing for coho. They will attack spoons, spinners and flies that are normally used for salmon. Winter time cutthroat fishing in the Fraser can mean fishing with single eggs under a float, casting small spinners or spoons, as well as fly fishing with nymphs and small leech patterns. In the spring, fly fishing with minnow/fry patterns to imitate newly hatched or migrating salmon fly can be a highly successful technique.

Rainbow trout are related to cutthroat trout, but are “different”. Most river rainbow trout tend to go to the ocean, where they will spend 2 or 3 years. The vast array of rich food sources allow these “rainbows” to grow big. When these rainbows go to the ocean, they are known as “steelhead”. Steelhead will return to spawn in two distinct runs. Summer-run fish will return starting in June and go through the end of October, or later. Summer run fish will hold in the river and spawn in the early spring. Winter run fish will begin their return in December, and continue depending on the river, into April. These winter runs will spawn in spring as well. A significant difference between steelhead and salmon is noted here – salmon die after spawning, whereas a steelhead can survive and spawn again. More information on steelhead can be found here

Rainbow trout in our local lakes are another subject altogether. Coastal lakes are generally not very nutrient rich, so our rainbows will not get so large in a lake. Plenty of stocking programs keep the local lakes full of catchable sized fish. There are a few local places that do provide some good “trout” fishing, but we prefer to keep those off the internet.

When we start talking about interior lakes in the Kamloops region, we are now into another realm of fishing that is very enjoyable, particularly for the fly angler. The interior lakes are very nutrient rich, having an abundance of shrimp and insect life which trout love. There are thousands of lakes in BC’s interior that offer excellent fly fishing possibilities for trout. Some of these lakes harbor trout exceeding 10 pounds, and more! From trolling a dragon fly imitation, to indicator fishing with a chironomid and dry fly fishing an evening sedge, we enjoy tremendous opportunities at a beautiful time of year.

The successful stocking programs undertaken by the Freshwater Fisheries Society of BC have been instrumental in providing anglers with these truly enjoyable fishing opportunities.

Please click on the images below for a larger photo

If you would like more information about booking a Trout Fishing Charter, please visit our Contact Form and let us know by clicking here.